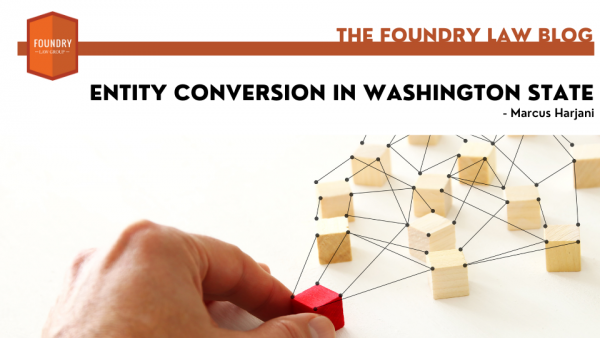 Points two and three might require one to look to the governing statutes of other states, for example, if one were converting a Delaware LLC to a Washington LLC, the Delaware statute governing LLCs would have to authorize conversion and any requirements followed.

The statute sets forth additional requirements to be included in the plan of conversion:

So the plan of conversion includes specific information and the actual organizational documents of the to be converted entity.

Step One: Prepare the Conversion Documents

In Washington, the entity must file Articles of Entity Conversion under RCW 25B.09.040, for example. Washington also requires a Conversion Cover Sheet to accompany the state conversion filing.

Other state filings vary by state. The filings generally include a form specifying the entity type, the jurisdiction, and agent contact information of the entity converting from the state.

The next step is to have the converting entity formally approve, internally, the plan of conversion and related documents. This is a necessary step in order to create a record of the action taken properly.

The last step is to make the filings.  This is in the “converting from” and “converting to” state (which may be the same state).

Conversion can be deceptively complex. We have worked on a variety of different conversions and can advise on your entity conversion. Please contact us today to learn more about how we might assist in your corporate conversion.