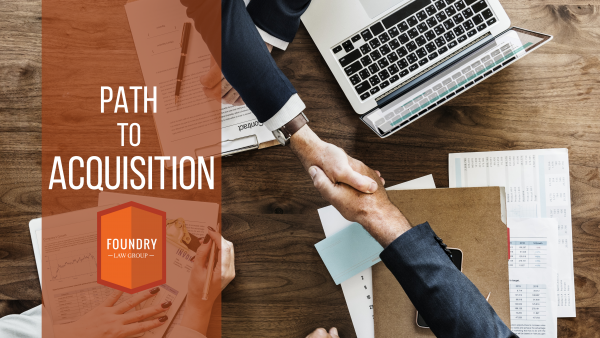 Congrats on the acquisition prospect! This is both an exciting and nerve-racking opportunity. Hiring an attorney during an acquisition is a natural expectation. The question we are addressing in this post is when to do so.

Hire an Attorney Before Signing a Letter of Intent

At some point, the Buyer will present a Letter of Intent (or LOI), sometimes an Indication of Interest (or IOI).

What is a Letter of Intent?

Important Terms of an Acquisition are in the Letter of Intent

Even though LOIs and IOIs are generally non-binding, acquirers such as large enterprises and private equity groups tend to include critical legal terms. This comes at a stage where the target company might not be represented by a lawyer and inadvertently agrees to terms that are difficult to negotiate later.

While LOIs and IOIs are non-binding, certain terms such as confidentiality and exclusivity are binding and the rest of the terms form the basis of a later deal. It might be difficult or impossible to remove unfavorable terms later on. It also fosters in the Buyer an expectation that such terms will be in the ultimate agreement.

So while this term is non-binding, it is a critical term that creates an expectation about the transaction. Attempting to negotiate this tern further along in the process might stop the transaction entirely.

Contact Foundry Law Group to Assist with your Acquisition

If you find yourself on the path toward acquisition we recommend reaching out as early in the process as possible. It is critical to advise on the deal and remain involved even if you or your broker are currently taking the lead with the buyer’s business team. We align with your team and support you as you proceed. Our goal is to help you feel confident with your acquisition negotiations and, ultimately, the deal.

We offer flat-fee packages for acquisitions with a large portion paid out of the closing. If you are involved with a possible acquisition, contact Foundry Law Group as early as possible in the process so that we can assist with your acquisition process.